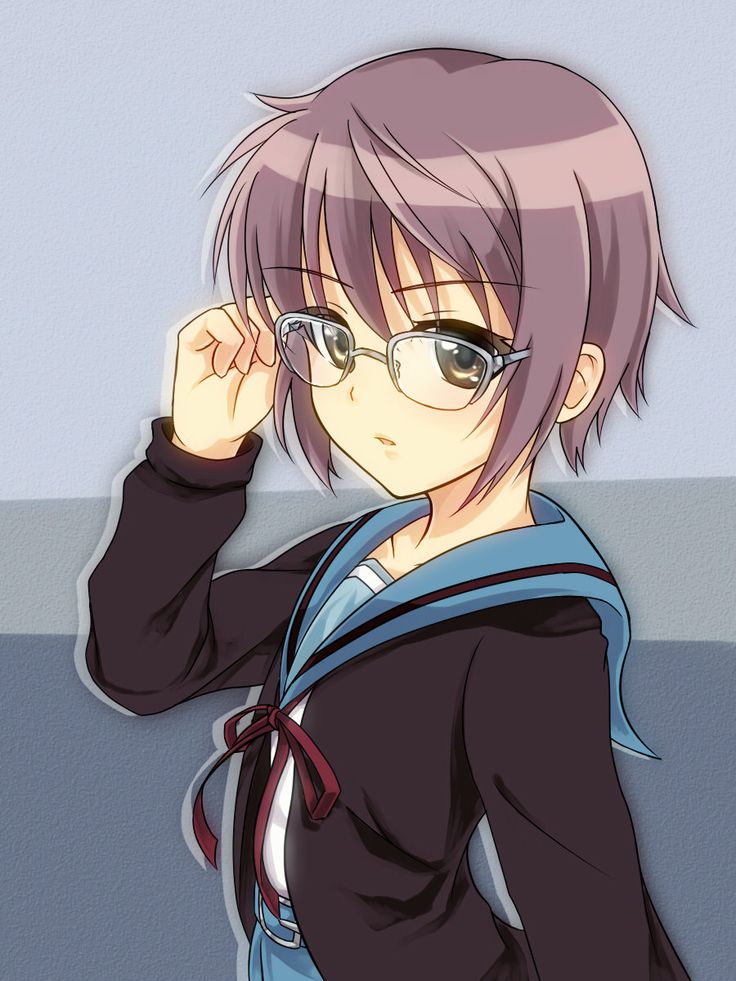 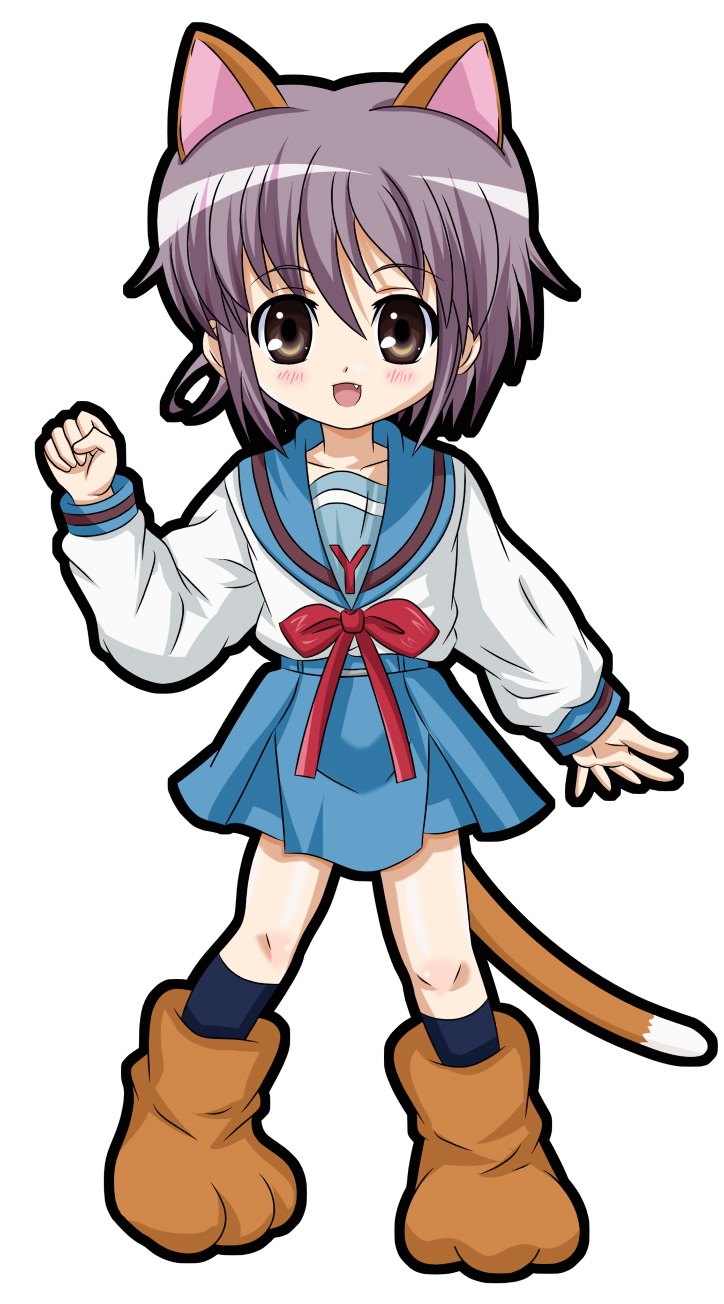 As Christmas approaches, Yuki is determined to have a party in her clubroom to celebrate the others' joining and keeping the club going.

The next day, whilst shopping for turkey for the party, the trio run into Mikuru Asahina and Tsuruya, the latter of which puts Nagato in a contest against Mikuru for one of her own turkeys, which just ends up being between Ryoko and Tsuruya.

Afterward, as Asakura gets permission to use the clubroom for a party, Yuki recalls the time when Kyon helped her get a library card.

As the Christmas party gets underway, Yuki recalls earlier in the year when the Literature Club was in danger of being shut down due to a lack of members.

Whilst figuring out what to do, Yuki encountered a mysterious girl from Kouyouen Academy who dragged her into writing an alien message to Santa in the playground.

Finding confidence in the girl's positive attitude, Yuki was able to ask Ryoko and Kyon to join the club.

Back at the party, Yuki tries to work up the courage to confess to Kyon but is interrupted at the last minute. The next day, Yuki and Kyon are surprised when the mysterious girl suddenly lands in front of them.

Yuki and Kyon help out the girl, Haruhi Suzumiya , who claims she spent the night attempting to capture Santa. She expresses her dream to meet aliens, time travelers, and espers.

Later, at the start of the New Year, Haruhi shows up at the Literature Club with her classmate Itsuki Koizumi, deciding to make themselves members, making the once quiet club more lively.

On the day before Valentine's Day, Ryoko helps Yuki make some Valentine chocolates while Haruhi drags Kyon around town in search of mysteries.

The next day, Yuki has lunch with Mikuru and Tsuruya, who give her some encouragement. Later, Yuki follows Ryoko's plan in the hopes of getting some time alone with Kyon.

But when she gets to the clubroom, she is shocked to see Haruhi giving Kyon a chocolate. After learning that Haruhi gave Kyon courtesy chocolate, Ryoko lashes out at Haruhi for not reading the mood, as well as blaming herself for her own failings.

Ryoko and Haruhi catch up to Yuki, who states she still intends to give Kyon her chocolates and had only run away to respect Haruhi's privacy.

Afterwards, Yuki gets the chance to give her chocolates to Kyon, who gladly accepts and enjoys them, though an opportunity to confess is thwarted by Tsuruya.

Spectating from afar, Haruhi recalls her encounter with a boy named John Smith three years ago. On White Day, Kyon gets Yuki and Haruhi some return gifts, with Yuki grateful for her gift while the others lament that he got Yuki and Haruhi the same thing.

The group are surprised to hear that Haruhi and Itsuki gained permission to go on school grounds long ago, while Tsuruya explains the source of the misunderstandings concerning Kyon and Mikuru.

As Ryoko helps Kyon study, Haruhi tests her with some questions from Kouyouen, which Yuki manages to solve in a manner that she can't explain in a human language.

Afterwards, Yuki and Kyon share lunch together, with Yuki making a unique request of her own, after which Haruhi announces they'll be going to a training camp.

Haruhi prepares the guidebooks for her planned hot springs trip, even filling out everyone's thoughts in advance.

Meanwhile, Ryoko, who had witnessed Kyon feeding Yuki the other day, becomes concerned about what they might get up to during the trip.

On the day of the trip, Haruhi has everyone pull straws to decide who sits next to whom on the train. This doesn't quite work out as planned but bodes well for Yuki.

Arriving at their destination, the group goes sightseeing around town, including a visit to the local temple.

As the others try to keep Haruhi under control, Mikuru helps Yuki buy a matchmaking charm.

The group arrive at the inn, with the girls immediately deciding to jump into the hot springs, which includes an open-air matchmaking bath.

Afterwards, the gang have a ping pong tournament, karaoke, and dinner. Yuki and Kyon take another bath and spot each other through the matchmaking bath.

The gang play a game of old maid with a penalty for the loser, with Ryoko getting some wild ideas about what might happen between Yuki and Kyon.

Later, Yuki and Kyon go to a nearby observatory for some stargazing while Ryoko and Haruhi tail them, admitting that she feels lonely as Yuki gets closer to Kyon.

Everyone ends up going to the observatory together, where Yuki gets to hold hands with Kyon. Shortly after returning home from the trip, however, Yuki is caught off-guard by an oncoming car.

Following her near-miss with the car, Yuki starts to exhibit a different personality, paying no heed to her minor injuries despite Ryoko's concerns.

The next day, Kyon is asked by Ryoko to look after Yuki, finding her to be unusually untalkative.

That night, Ryoko confronts the Yuki, questioning who she really is. The present Yuki reveals herself to be a different Yuki Nagato who possesses the other Yuki's memories but not her experiences.

Hearing about her situation, Ryoko remains supportive of the current Yuki, taking her to the hospital to get checked up before informing Kyon.

As the two watch over Yuki as she continues to attend school without letting anyone else catch on, Kyon and Yuki go to the library together.

As Yuki becomes entranced by the library, she remembers that this was the place the original Yuki first met Kyon, who helped her get a library card.

Sensing that the consciousness of the old Yuki may be waking up inside her, Yuki starts to wonder what will happen to her current self once she does.

In addition, she starts developing her own feelings towards Kyon, leading her to suspect her two personalities may be merging together.

Seeing more of the old Yuki's memories in her dreams, Yuki begins to worry that she'll disappear completely once the other Yuki awakens.

Following their exams, Nagato asks Kyon and Ryoko to take her to a used book fair. On the way back, Ryoko leads Yuki to realise that she has fallen in love with Kyon, leaving her even more fearful about her inevitable disappearance.

Sensing the next time she falls asleep will be her last, Yuki spends the day with Ryoko, keeping her disappearance a secret from her.

Later that night, Yuki confesses to Kyon over the phone, falling asleep by the time Kyon reaches her, after which the original Yuki wakes up in her place.

Before waking, Yuki is greeted by her other self, who encourages her to confess her feelings for Kyon. As Yuki returns to her normal life, Ryoko is simultaneously happy and sad upon the safe return of one friend and the departure of another.

Meanwhile, Kyon is reluctant to face Yuki after hearing her other self's confession. After the war ended, memories of the gruesome battles still lingered in the minds of the people, causing wide-spread persecutions against those with the kekkei genkai.

Because of this, the Yuki clan, whose members carried the Ice Release kekkei genkai went into hiding for their own safety.

Haku and his mother , now both deceased, were the only known members of this clan. What happened to the rest of the clan is unknown, but it is assumed that they were either killed or, like Haku's mother, went to live peaceful lives living as normal people, without revealing their true bloodline.

Memories of the clan still linger, its members and kekkei genkai being called "cursed" even during the Fourth Shinobi World War. Sign In Don't have an account?

Start a Wiki. This is the article on the clan.